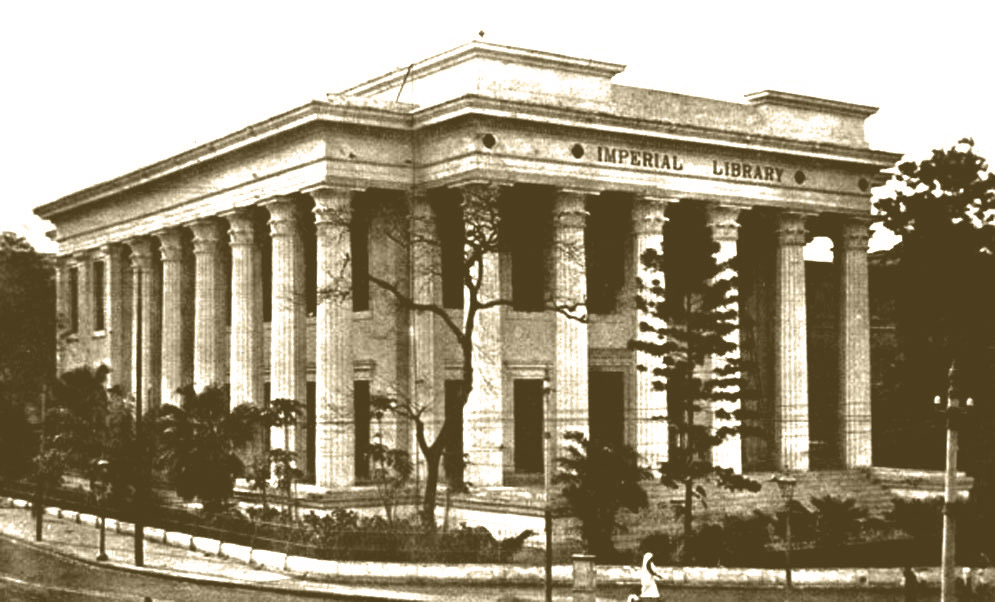 ইমপেরিয়াল লাইব্রেরি, মেটকাফ হল, কলকাতা, c১৯০৫
The Imperial Library was founded in 1891 by combining a number of Secretariat libraries. Of these, the most important and interesting was the library of the Home Department, which contained many books formerly belonging to the libraries of East India College, Fort William, and the East India Board in London. But the use of the library was restricted to the superior officers of the Government.
Long before the Imperial Library founded, a subscription library, called Calcutta Public Library, ran in Metcalf Hall since 1836. Donations of books from individuals formed the nucleus of the library. Poor students and others were allowed to use the library free of charge for a specified period of time. Any subscriber paying Rs 300 at one time or in three installments was considered a proprietor. Dwarkanath Tagore was the first proprietor of Calcutta Public Library. The then Governor General of India, Lord Curzon, observed that the Imperial Library and Calcutta Public Library were not being used as expected because of limited access and lack of amenities and felt the need of merging the two for best utilization of their resources.
The new library, called Imperial Library, was formally opened to the public on 30 January 1903 at Metcalf Hall, Kolkata. The aims and objectives of the Imperial Library were well defined in a Notification in the Gazette of India: ‘It is intended that it should be a library of reference, a working place for students and a repository of material for the future historians of India, in which, so far as possible, every work written about India, at any time, can be seen and read.’
John Macfarlane, Assistant Librarian of the British Museum, London, was appointed the first Librarian of the Imperial Library. After his death, the polyglot scholar Harinath De took over the charge of the library. J. A. Chapman succeeded him in 1911.
Photograph taken in c1905. Published in Times of India, Bombay. Source: Special Collections, University of Houston Libraries