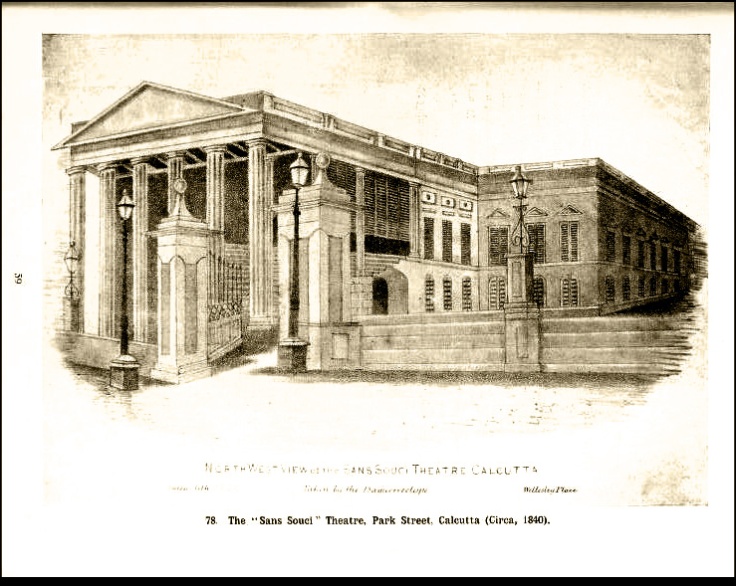 সাঁ সুসি রঙ্গমঞ্চ, পার্ক স্ট্রিট, কলকাতা, ১৮৪১
The Sans Souci Theatre and Its immediate predecessor, Chowringhee Theatre, were greatly instrumental to the Bengali enterprise in the theatrical line, culminating afterwards in the establishment of the Belgachia permanent stage. The Sans Souci Theatre was opened in 1839 i.e. after the Hindu Theatre and Nabin Babu’s theatre at the house of Babu Nabeen Chandra Bose.
After the destruction of the Chowringhee Theatre, a temporary theatre under the title of Sans-Souci was initiated by Mrs. Esther Leach at the corner of the Government Place East, Waterloo Street. The upper flat of the Building was occupied by St. Andrew’s Library and the lower flat that looked more like a godown was converted by Mrs. Leach into an elegant theatre large enough to accommodate 400 audiences. Sans Souci performances continued here for about a year till the larger house was being reared on her account’ at No. 10 Park Street where the St. Xavier’s College now stands.
The Sans Souci theatre was an enormous building resembling the Greek Parthenon with six Doric columns. The structure of the theatre measuring 200 feet in length and 50 feet breadth was built with a handsome portico in front. The stage occupied 28 feet in breadth, 50 feet depth, the space concealed from the audience above and below being appropriated to the green rooms etc. The theatre building, elegantly designed by the architect, Mr. J. W. Collins, was completed in May 1840.
To meet its funding requirements, subscriptions came in liberal response, the last being headed by Lord Auckland and Prince Dwarakanath Tagore who contributed Rupees one thousand each and the total amount of the subscription rose to Rs. 16000. This also included some money contributed by Mrs. Leach herself. Mr. Stocqueler, Editor, Englishman also offered his services to help her in her noble enterprise. The construction and the interior fittings including scenery and wardrobe cost Rs. 80,000/- the rest being raised by the mortgage of the property.
The formal opening took place on March 8, 1841 with Sheridan Knowless’s “The Wife” under the patronage and immediate presence of the Governor General Lord Auckland. (Asiatic Journal 1841, May.)
Mrs. Leach, the queen of the Indian stage, as she was called, appeared as Mrs. Wyindham in the farce ‘The Handsome Husband,” an after-piece of Merchant of Venice, where Mr. James Vining an actor of London-fame, appeared as Shylock. The house was full, all was in cheerful mood. In the midst of all these, Mrs. Leach, while waiting by the stage for her cue, caught fire from an oil-lamp and in an instant was in flames. She could not survive the fatal burning. She passed away on Nov. 22, 1843 at 34, and was buried in the Military Cemetery at Bhowanipore. “The catastrophe which cost Mrs. Leach her life also brought to a close the last English theatre in which the Bengalees took a keen interest After that, English Companies have no doubt given performances now and then, but the Bengalees had little concern for any of them.” See more Dasgupta. Indian Stage