This is one other instance of mistaken identity of Armenian Ghat, which is often being called Mullick Ghat or Mullik Ghat  by laymen and scholars alike. The root cause of such a mistake probably lies in our inattention to the fact that the river ghat and the ghat pavilion are two distinctive entities. It becomes a knotty problem when a new ghat replaces a ruined one by reconstructing its ghat-steps, and erecting a new pavilion. As we all know, Armenian Ghat and Mullick Ghat existed close to each other with their separate structure and unique history, but a few know how close they were in terms of yardsticks and timetables so that their identities never get lost . We already discussed these issues in earlier posts.

Photochrom Zurich, is the company behind the production and distribution of this type of event, this photochrome is an authentic photochrome of their house. Every image produced by them is referenced in gold letters in the lower left corner: 20036.PZ. The photochrome is a process that borrows applications from photography and lithography. The proof is produced from a black-and-white negative and then processed using a color lithographic method. The invention was deposited in 1888 by the Swiss company Orell Fussli, then presented to the public at the 1889 World Fair in Paris.

Besides the identity issue, the publisher provided us with a misleading information about the pavilion structure, which was made of wrought iron and not ‘of wood’ as stated. “A singularly beautiful lacy cast iron canopy with arches and pillars – distinguishes Armenian Ghat from all brick and stone pavilions of those days. In the mid-18th century, the rich Armenian trader Manvel Hazaar Maliyan had shipped in an elaborate cast iron facade for the Armenian Ghat ..”
Sebanti Sarkar, who did a fascinating study (2017) on colonial architecture in consultation with celebrated architect Professor Manish Chakrabarti, observed that the elegance of the lacy floral motif fashioned in cast iron aroused a general interest in using ornamental wrought iron to beautify public places, corporate buildings as well as family mansions. Calcutta elites assumed the ‘newer aesthetics of living’. The merchants and, zamindars, munshis and baniyas found it appropriate to adopt the new hallmark and style of power. Gradually innovative patterns evolved admixing different European with traditional Bengali motifs. Local variety of cast iron grilles, bells and whistles, sometimes twined with religious icons or family insignia became affordable and popular by early 1900s. [See: Sarkar] 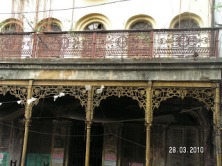 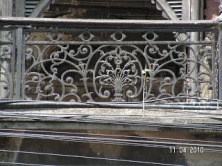 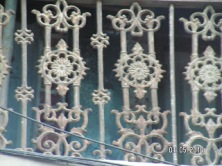 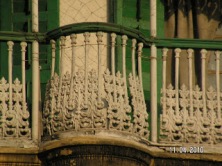 রঙ্গালয়, পুরনো কেল্লা, লালদিঘী, কলকাতা, ১৭৮৬
The Play House was the earliest theatre in Calcutta. The position of the old Fort, built in 1692 and dismantled in 1819, was to the west of the Writers’ Buildings and Holwell’s monument, on the other side of the old Fort Street, where stands the Customs House thereafter. The Play House was established in 1755, a year before the Battle of Lal Dighi took place. The Play House served as an advantageous position of offense for Serajuddulah who seized it, and thus played a prominent part in his siege of Calcutta in 1756. The Play House must have ceased to exist sometime between Oct. 1781 and 1784 A.D. Unfortunately we possess no detailed account of this early English Theatre, nor as to what plays were performed there, as there was no Gazette, nor newspaper at the time. It was very likely that Messrs. Drake and Holwell took some active interest in it as it appears that the house though built by voluntary subscriptions was patronised by the Company. The rest, however, is lost in the hoary mist of the past. See more. It has become particularly difficult to tell apart the accounts of the Old Fort Play House and the Calcutta Theatre that came up in Lal Bazar area in 1776, often called the New Play House for distinction.
The above coloured etching with aquatint by Thomas Daniell (1749-1840) describes the location of the Old Fort, Playhouse and Holwell’s Monument in Calcutta  taken from ‘Views of Calcutta’ published in 1786. This view looks along Clive Street. The eastern wall of old Fort William can be seen on the left. Hollwell’s Monument is on the right that erected in 1756 and removed from this site in 1821.

বেঙ্গল ক্লাব, এসপ্ল্যানেড রো, কলকাতা, ১৮৩৩
The Bengal Club was founded at Calcutta in 1827. At the time this image was produced the club was housed in Gordon’s Buildings in the middle of Esplanade Row. It moved to Tank Square around 1830 and subsequently purchased the house in Chowringhee Road formerly occupied by Thomas Babington Macaulay. The Bengal Club is still in existence at this site.
When the Bengal Club was first conceived in the winter of 1826-7, it was christened the Calcutta United Service Club, at a meeting held in the Calcutta Town Hall. It was presided over by Lt Col the Hon J. Finch, who was later to become the first President of the Club. The Club was housed in a building in Esplanade West, erected in 1813. Fund raising was through the then popular method of lottery.
This is a lithograph of William Wood, derives from plate 5 of his album ‘Views of Calcutta’, 1933

এসপ্ল্যানেড রো থেকে ধর্মতলা (ট্যাঙ্ক) তালাও চত্বরে সাহেবদের আবাস, ১৮৪৮
Chowringhee Road formed part of the main residential area for Europeans in Calcutta. This view was taken from No 11 Esplanade Row and looks across the reservoir, Dhurrumtollah (Dharamtola) Tank. Prominent in the distance is the column of the Monument to Sir David Ochterlony – a strange mix of Egyptian, Turkish and Greek styles, of 152 feet high. It was erected in 1828 by public subscription, in honour of Ochterlony
This coloured lithograph was taken from plate 25 of Sir Charles D’Oyly’s ‘Views of Calcutta and its Environs’.

চৌরঙ্গী রোড – কলকাতার প্রধান সাহেব পাড়া, c১৮৩৩
Chowringhee Road was the principal route through the main European residential area of Calcutta. In the foreground, people tend their animals and relax in groups. These were years of enormous and largely uncoordinated growth in Calcutta, and the characteristic view of the city became one in which scenes of flourishing wealth were juxtaposed with ones of ramshackle poverty.

This lithograph is taken from plate 17 from ‘Views of Calcutta’ an album of paintings by William Wood.

জান বাজার স্ট্রীট, অধুনা কর্পরেসন স্ট্রীট, চৌরঙ্গী, c১৮৩৩
Jaun Bazaar Street (now Corporation Street) was the first sidestreet of Chowringhee Road in Calcutta. On the corner of Jaun Bazaar Street was a complex of buildings housing the Secret and Political Department, dealing with relations with the Indian and other foreign states in the region.
Residential areas like Chowringhee and the Esplanade acquired boundary walls, screens and gates to match the imposing new buildings, many of which were consciously based on classical styles – as if to bring the effects of Western civilisation into the alien Indian environment. The styles were adapted from their European models to provide greater shade and good circulation of air.
This lithograph is taken from plate 8 from ‘Views of Calcutta’ an album of paintings by William Wood.

চৌরঙ্গী রোডে সাহেবদের প্রাসাদোপম বাসগৃহ, ১৯৩৩
The proud mansions that made Chowringhee Road – a much-vaunted address for the European residents of Calcutta. One contemporary writer, William Henry Giles Kingston, described these houses in the fashionable suburb: “clusters of columns, long colonnades and lofty gateways have a very imposing effect, especially when mingled with forest trees and flowering shrubs.”
This lithograph is taken from plate 24 from ‘Views of Calcutta’ an album of paintings by William Wood.

এলিয়ট পুকুর, চৌরঙ্গী, কলকাতা, c১৮৩৩
Elliott’s Tank facing Harington Street and the Birjee Tank. Harington Street was formerly known as Graham Street
This lithograph is taken from plate 21 from ‘Views of Calcutta’ an album of paintings by William Wood.

This lithograph derives from plate 10 from William Wood’s ‘Views of Calcutta’. This view is the only one of Wood’s series to show specifically Indian-style dwellings in Calcutta. They are near the first of the large ‘tanks’, or manmade reservoirs, on the edge of the Chowringhee district. The tanks were used as a general water-supply, for bathing and washing by the inhabitants of the city. A clear view of Manohur Doss’s Tank can be seen in in the Panoramic View Of Chowringhee Road Across Maidan

This lithograph is taken from plate 10 from ‘Views of Calcutta’ – an album of paintings by William Wood.

কলকাতা বিশপের বাসভবনের বারন্দা থেকে চৌরঙ্গির দৃশ্য, ১৮২৮
The Bishop’s Palace was situated at No.5 Russell Street from 1825 until 1849, in which time it housed four successive Bishops of Calcutta. The last of these, Bishop Wilson, built a new cathedral on the south-east corner of the Maidan and relocated the palace to a house opposite the cathedral. Marianne James, the artist of this work and wife of the third Bishop of Calcutta, wrote: ‘Our Palace … is a splendid house of 3 stories high with a delightful verandah to each storey entirely from one end of the house to the other on one side’.
Watercolour with pen and ink  by Marianne Jane James (b. 1805).