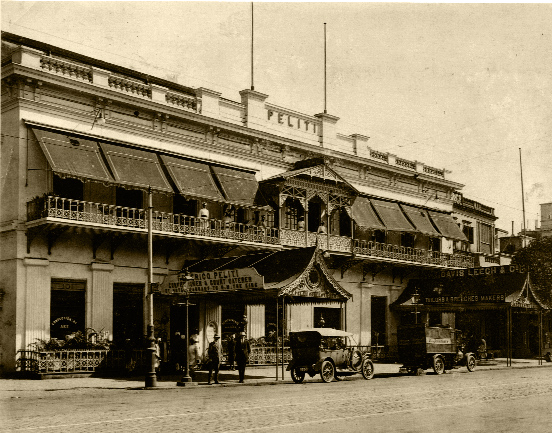 পেলিটি’স রেস্তোরাঁ, গভর্নমেন্ট প্যালেস, কলকাতা, ১৮৭০
Chevalier Federico Peliti was a Manufacturing Confectioner, a purveyor of cakes, chocolates etc by appointment to Her Majesty the Queen Empress. He started his restaurant and confectionery business in 1870 at 11 Government Place in the Dalhousie Square area of Calcutta. The Pelitis’ was famous for their three course lunch which could be had very quickly at Rs 1.50. The price remained static from 1917 till about 1924. If we consider that the Firpos’ used to cater a similar lunch for Rs 2.50 in 1947 then you will realise that Peliti’s was not really cheap. The Peliti’s did a lot of outside catering and the variety of their cakes was well known. A great masterpiece of Peliti was a 12′ high replica of the Eiffel Tower in sugar, crafted by the great man himself in December 1889. It was here at a lunch meeting on 26-Sep-1919 that the Rotary Club of Calcutta was organised thus ushering in the movement in India and indeed the mainland of Asia. Peliti’s restaurant closed down after Independence.
The photograph was taken most likely by Frederico Peliti himself in c1890s