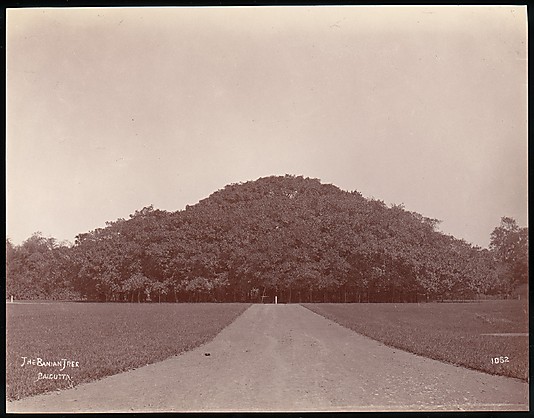 মহীরুহ বনস্পতি, শিবপুর বোটানিকাল গার্ডেন, c১৮৬০
The best-known landmark of the Botanical Garden is The Great Banyan, an enormous banyan tree (Ficus benghalensis) that is reckoned to be the largest tree in the world, at more than 330 metres in circumference. The garden is situated on the west bank of the river Hooghly (Ganga). The credit for the foundation of the Garden is generally given to Colonel Robert Kyd (1746-1793) who established it in 1787. The official name of the Garden during the Company’s rule was ‘The Hon’ble Company’s Botanic Garden, Calcutta’, subsequently, it was renamed ‘The Royal Botanic Garden, Calcutta’ in the early 1860s.