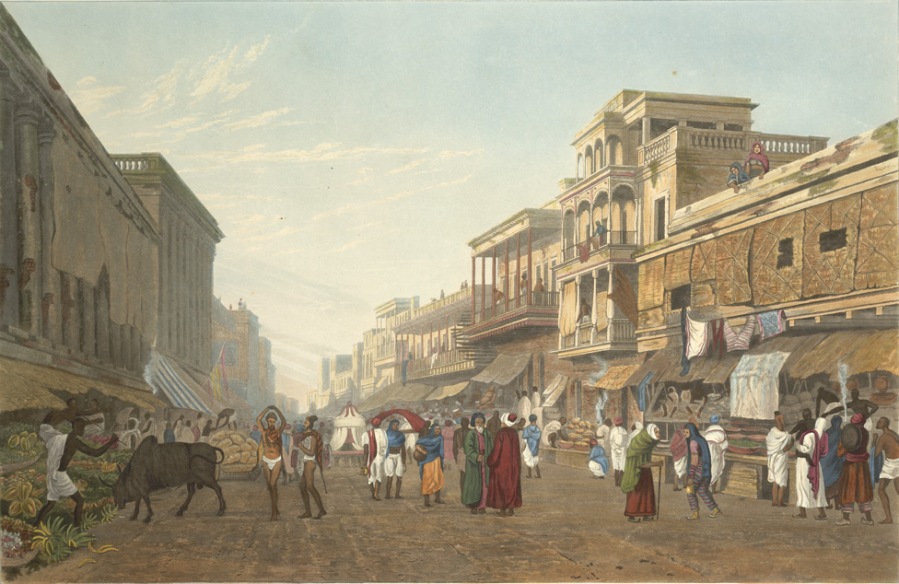 চিৎপুর রাস্তায় দোকান-বাজার, কলকাতা, ১৮২৬
Chitpur Road was Kolkata’s oldest road. It has existed for at least 400 years. It was known as Pilgrim Road and started from the North-end of the city stretched up to Kalighat Temple on Adi Ganga. Apart from the aristocracy, there have been common folks engaged in various trades. The distinctive Bengali panjika almanac and Battala books were brought out from this place. So many things on Chitpore Road have been an integral part of Bengal’s life and culture being the centre of supplies for jatra, magic shows and musical instruments, including English brass bands. It might have received its name from the goddess Chiteswari, who had a splendid temple here erected by Gobindram Mitter, or one Gobinda Ghosh, in 1610. At the temple, Chitey dakat, the notorious bandit of the region, offered human sacrifices. The area could also have acquired its name from him. The lofty dome of the temple, which was known as Nabarutna or the shrine of nine jewels, fell during the earthquake of 1737, and it is now in ruins.
This Aquatint, coloured painting dated 1826 is the last plate from James Baillie Fraser’s ‘Views of Calcutta and its Environs’. Fraser wrote: “At the east end of Esplanade Row, the European quarter continued if one turned at right angles southwards down the Chowringhee Road. However, if one turned left up Cossitollah Street (named from its being the butcher’s quarter originally), one began to enter the Indian city, and especially so when this road crossed the Lall Bazaar and became the Chitpore Road. The Street exhibits a bewildering mix of Indian and decaying Palladian architecture, but is very obviously a bazaar. Cossitollah Street had in it a large number of purely European businesses.”