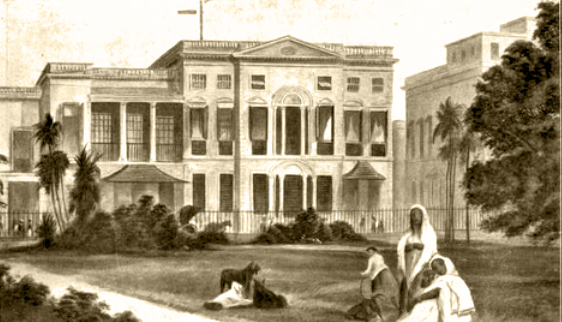 ফোর্ট উইলিয়াম কলেজ, ‘এক্সচেঞ্জ’ অফিস বাড়ি, কলকাতা, c১৮০০
This is a view of the building, known as old Exchange building where Fort William College later moved. Lord Wellesley founded Fort Williams College on 10 July 1800 to train the Civil Servants locally. The idea was to teach the British rookies understand the Oriental culture, tradition, law and administration to better coordinate in the governance. The period was of immense historical importance for bringing about Bengal renaissance. A establishment of The Calcutta Madrassa in 1781, the Asiatic Society in 1784, and the Fort William College in 1800, completed the first phase of Calcutta’s emergence as an intellectual centre – a cradle of creativity as well as scholarship. Fort William College was set up within the Fort campus, but  after a while housed in the Writers’ Buildings on the southern side of the Tank Square, then a part of military parade ground, at the corner of Council House Street. Initially the Company managed to occupy a range of buildings for the rent-free accommodation of its writers. The house that Wellesley had taken for the College on lease was subsequently occupied by Messrs. Mackenzie Lyall & Co., and became well known as The Exchange. Still later, it housed the offices of Bengal Nagpur Railway. Bentinck with his educational policy of public instruction in English in 1835, had clipped the wings of Fort William College and the Dalhousie administration formally dissolved the institution in 1854
Some of the eminent scholars who contributed towards development of Indian languages and literature are: William Carey (1761–1834); Matthew Lumsden (1777 – 1835); John Borthwick Gilchrist (June 1759 – 1841); Mrityunjay Vidyalankar (1762?–1819); Tarini Charan Mitra (1772–1837); Lallulal (also spelt as Lallo Lal), the father of Hindi Khariboli prose; Ramram Basu (1757–1813) ; Ishwar Chandra Vidyasagar (1820–91) ; Madan Mohan Tarkalankar (1817–58)
Photograph by Johnston & Hoffman