হোয়াইটওয়ে, লেডল কোম্পানির বিভাগীয় বিলাস বিপণি, চৌরঙ্গি রোড, কলকাতা, ১৯০৫
Whiteaway, Laidlaw & Co was ‘the’ colonial emporium or department store in India and became a household name throughout the East. The emporium picked up a nickname, ‘Right-away & Paid-for’ because of its ‘no credit’ policy. It was founded in Calcutta by two eponymous Scotsmen in 1882 and had branches in Bombay, Madras, Lahore and Simla as well as further afield in Colombo, Burma, the Straits Settlements and in Shanghai. This elaborate, ‘wedding-cake’ structure was purpose-built by Calcutta-based contractors Mackintosh Burn & Co as the headquarters of Whiteaway, Laidlaw & Co; its architecture, sheer size and prominent corner position were intended to attract buyers to enter its doors. The ground floor and the first floor were occupied by the department store itself. Given the size of the building, the floor space was huge. The second and third floors accommodated offices and apartments; the offices were known as Victoria Chambers. As shown in the picture postcard here, there was also a nice Tea Room in this famous Calcutta departmental store that once rivaled Harrod’s, Macy’s and Mitsukoshi. 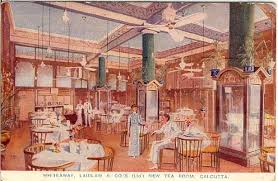 In his excellent book, “Plain Tales From the Raj”, Charles Allen records the recollections of Norman Watney who remembered that:
The Whiteway, Laidlaw & Co.’s departmental stores in Calcutta was considered the poshest and classiest department store this side of the Suez. His view was not shared by some other city buyers, however, who thinks, “Whiteaway’s had acquired the distinction of being solely for those with small purses and had a large clientele of junior officers. Others in a more senior position used to go down the road about a quarter of a mile away to the Army & Navy Stores.”
Image Source: Vintage British Indian B/W Picture Postcard, Calcutta, Whiteaway Laidlaw & Co. Ltd Building. Street Scene. Clock Tower. dated 1905 (ID: 89431) Image Source: Tea Room of Whiteway Laidlaw & Co.