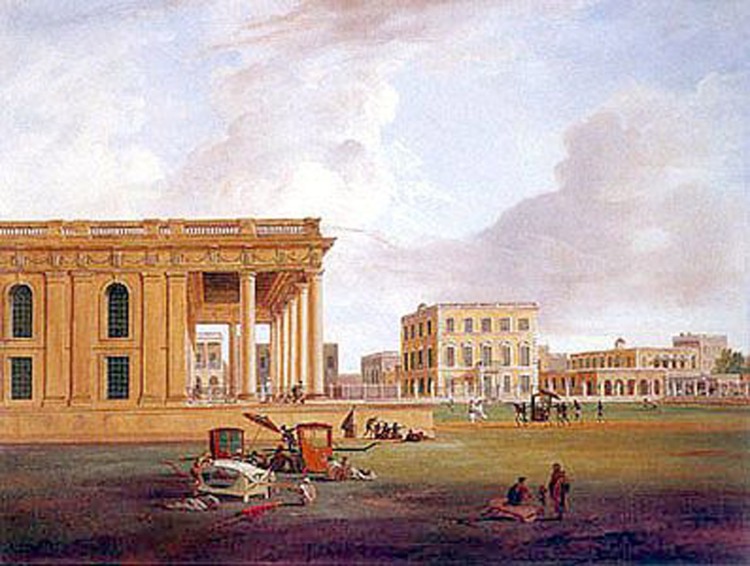 সেন্ট জনের গির্জা, লালদিঘী, কলকাতা, ১৭৮৭
St. John’s Church is the third oldest church in Calcutta only next to the Armenian and the Old Mission Church. Originally a cathedral, it was among the first public buildings erected by the East India Company after Calcutta became the effective capital of British India. Located at the North–Western corner of Government House, the construction of the St. John’s Church started in 1784, with Rs 30,000 raised through a public lottery, and was completed in 1787. The land for the Church was donated by the Maharaja Nabo Kishen Bahadur the founder of the Shovabazar Raj Family. The foundation stone was laid by Warren Hastings, the Governor General of India on 6 April 1784. Designed by architect Lieutenant James Agg of the Bengal Engineers, the St John’s church is built with a combination of brick and stone, commonly known as the pathure girja or ‘Stone Church’. The stones came from the medieval ruins of Gour, and were shipped down the Hooghly River. The minutes book in the church office tell in detail the story of how the ruins of Gaur were robbed to build St John’s church.
The church is a large square structure in the neoclassical architectural style. A stone spire 174 ft tall is its most distinctive feature. The spire holds a giant clock, which is wound every day. The walls of the church contain memorial tablets, statues and plaques, mostly of British army officers and civil servants, and a precious painting Last Supper in Leonardo da Vinci style, by Johann Zoffany. the painting is not an exact replica of Leonardo’s master piece. Zoffanay rather gave an Indian touch to the historic Biblical event. The St John’s Church was constructed on an old graveyard, so the compound houses a number of tombs and memorials, but only a few dates back to the date of construction of the church. The church compound still exhibits valuable historical memorials like Job Charnock’s Mausoleum, Black Hole of Calcutta Monument, Second Rohilla War Memorial, Francis (Begum) Johnson’s grave, and Lady Canning’s Memorial.

Tall columns frame the church building on all sides and the entrance is through a stately portico, as seen in the above painting, ‘Portico of St John’s Church, Calcutta’ by Thomas Daniell dated 1787.