মুন্সি তথা দেশীয় ভাষাবিদ শিক্ষক, কলকাতা, কোম্পানি আমল
The role of British orientalists is to bring to light documents and information that would have been kept secret and lost in the dark cells of Indian priests, were it not for their unremitting dedication. This official and impersonal discourse demonstrates the intellectual superiority and effective domination of British scholars over Indian scholars. Their talents were used in researching, compiling and translating materials, but their labour as well as intellectual abilities were not considered worth noticing. It was the British approach and treatment of this new source of knowledge, their curiosity and wisdom, which were ultimately praised. Indian scholars were not legally admitted into the circle of British orientalism until mid-nineteenth century. The procedures of the Asiatic Society founded in Calcutta in 1784 clearly states that Indians cannot be taken in as full members of the Society although their contributions to the annual publication of the Asiatic Researches are welcomed.
As Edward Said said orientalism as a science was bound to collude with colonialism or to take in the history of European domination over the East. There is indeed clear evidence that, until the 1830s, the British believed that the colonization of India could not be sustained without a deep understanding of Indian society. Warren Hastings, governor general of India from 1773 to 1785, confirms that this collusion between native informants and native scholars is the best option the British have to maintain a firm grip on the newly conquered provinces. “Every instance which brings their real character home to observation will impress us with a more generous sense of feeling for their natural rights, and teach us to estimate them by the measure of our own. But such instances can only be obtained in their writings: and these will survive when the British dominion in India shall have long ceased to exist” See. Hastings gained this view through his personal interactions with native scholars and teachers; one of them was Nabokrishna Deb whom he employed as Persian tutor in 1750. 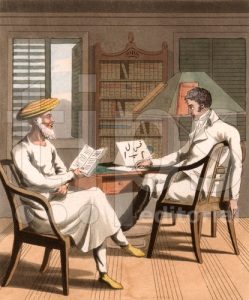 Lord Wellesley founded Fort Williams College on 10 July 1800 to train the Civil Servants locally. The idea was to teach the British rookies understand the Oriental culture, tradition, law and administration to better coordinate in the governance. The period was of immense historical importance for bringing about Bengal renaissance. In 1815, Ram Mohan Roy settled in Calcutta, establishment of The Calcutta Madrassa in 1781, the Asiatic Society in 1784, and the Fort William College in 1800, completed the first phase of Kolkata’s emergence as an intellectual centre. Fort William College aimed at training British officials in Indian languages and in the process it fostered the development of Asian languages dominated: Arabic, Hindustani, Persian, Sanskrit, Bengali; and later Marathi and even Chinese were added. Some of the eminent scholars who contributed towards development of Indian languages and literature are: William Carey (1761–1834); Matthew Lumsden (1777 – 1835); John Borthwick Gilchrist (June 1759 – 1841); Mrityunjay Vidyalankar (1762?–1819); Tarini Charan Mitra (1772–1837); Lallulal (also spelt as Lallo Lal), the father of Hindi Khariboli prose; Ramram Basu (1757–1813) ; Ishwar Chandra Vidyasagar (1820–91) ; Madan Mohan Tarkalankar (1817–58)[ Picture at left -> A European Gentleman with his Moonshee, or Native Professor of Languages, plate 1 from ‘The European in India’, published 1813 (hand-coloured aquatint) – a hand-coloured aquatint, painted by Charles D’Oyly (1781-1845) in c1813.]
Because they needed to conduct business in Indian languages, British soldiers and administrators labored to acquire local vernaculars. Indian scholars were a key figure in the construction of British knowledge of the Orient, although their participation was not systematically acknowledged.- See. British orientalists would normally refer to moonshee when talking about their Persian language teachers and to brahman or pundit, when referring to their Hindu interlocutors. A brahman is a member of the highest or priestly caste among the Hindus”, and a munshi is a secretary; a language teacher”. Although there has always been distinction between Persian and Hindu cultures, it is not noticeable in context of language teaching. The title Munshi denotes the family’s role in teaching native languages such as Urdu, Hindi, Persian and Bengali or as secretaries to the Europeans. There is a place called Munshibari estate established in the 1700s was held by a landed, Anglo-Indian family of Munshis in Chandpur now in Bangladesh.  This may suggest possible intermarriages with the British as an outcome of a cordial relationship developed between them and their Munshis.
The lithograph “Our Moonshee,” displayed here at the top, is from one of the 40 plates by George Francklin Atkinson depicted with dry humor life in a “typical” English “station” in the second half second half of the 19th century during his stay in India.