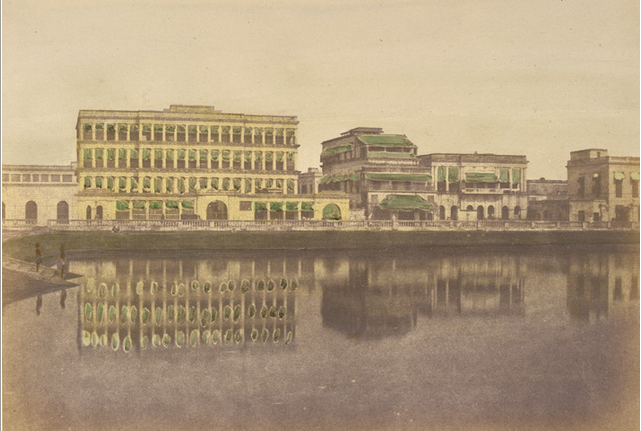 ধর্মতলা তালাও সংলগ্ন মিলিটারি ক্লাব, এসপ্ল্যানেড রো, কলকাতা, ১৮৫১
This is a view looking across the Dhurrumtollah Tank towards the buildings along Esplanade Row. The Military Club, later United Services Club, and finally the Bengal Club, is the four storied building on the left. When the Bengal Club was first conceived in the winter of 1826-7, it was christened the Calcutta United Service Club, at a meeting held in the Calcutta Town Hall. It was presided over by Lt Col the Hon J. Finch, who was later to become the first President of the Club. The Club was housed in a building in Esplanade West, erected in 1813. Fund raising was through the then popular method of lottery. This large neo-classical building now houses the Geological Survey of India.
A hand-coloured print of the Military Club House, Calcutta, from the Fiebig Collection: Views of Calcutta and Surrounding Districts, taken by Frederick Fiebig in 1851.